The Costa de Sol is home to so many of Continental Europe`s best golf courses and golfing experiences. A very popular vacation spot for Northern Europeans (Spain had over 18 million British visits in 2019 alone!) they know how to do hospitality well. You will enjoy the local tapas and healthy Mediterranean cuisine as well as lovely, quaint villages plus on a day off the British island of Gibraltar awaits but the golf is spectacular with the 1997 Ryder Cup venue, Real Valderamma in addition to so many other very enjoyable courses such as Torrequabrada with its lovely scenery, and so many more! 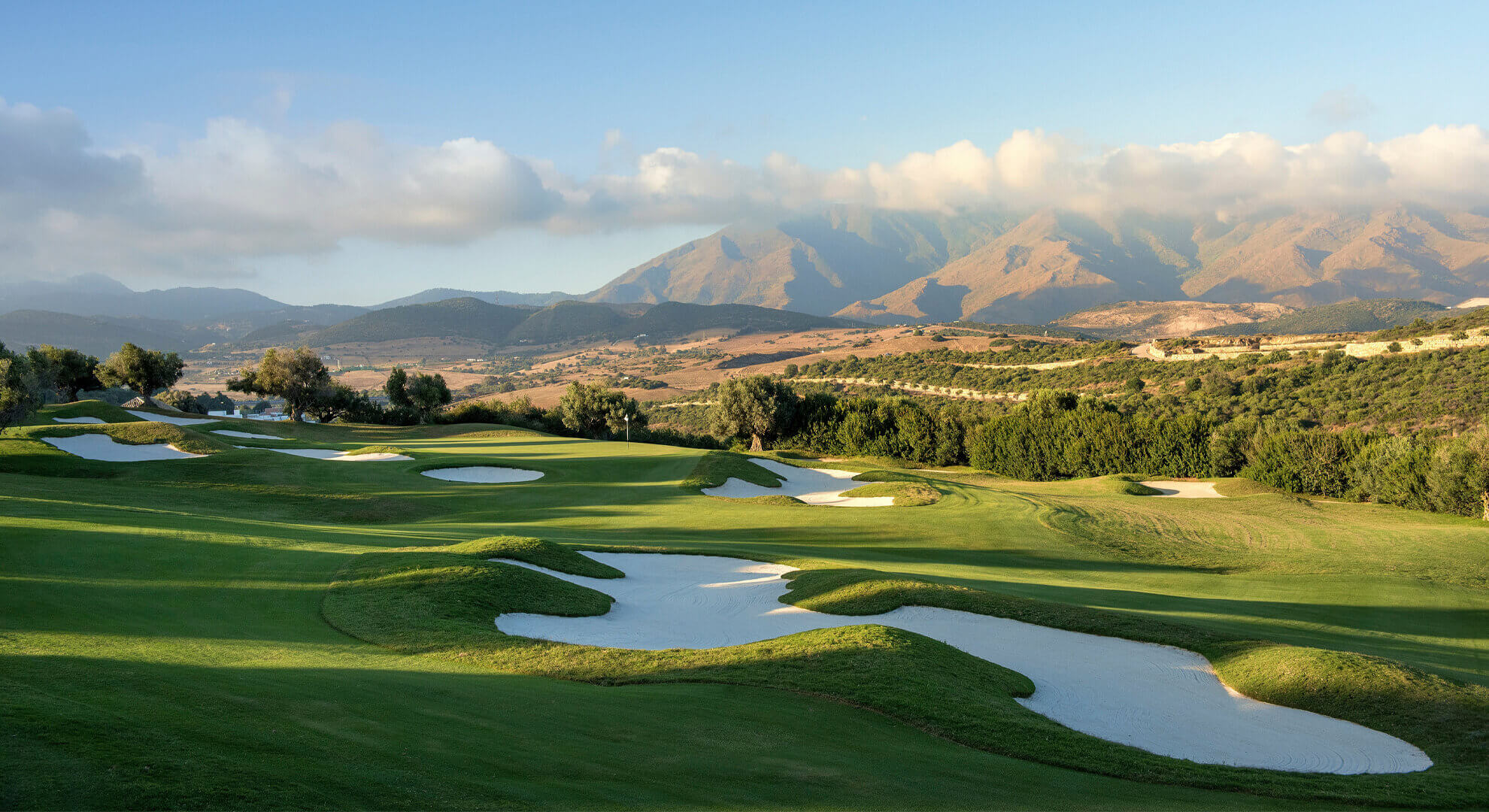 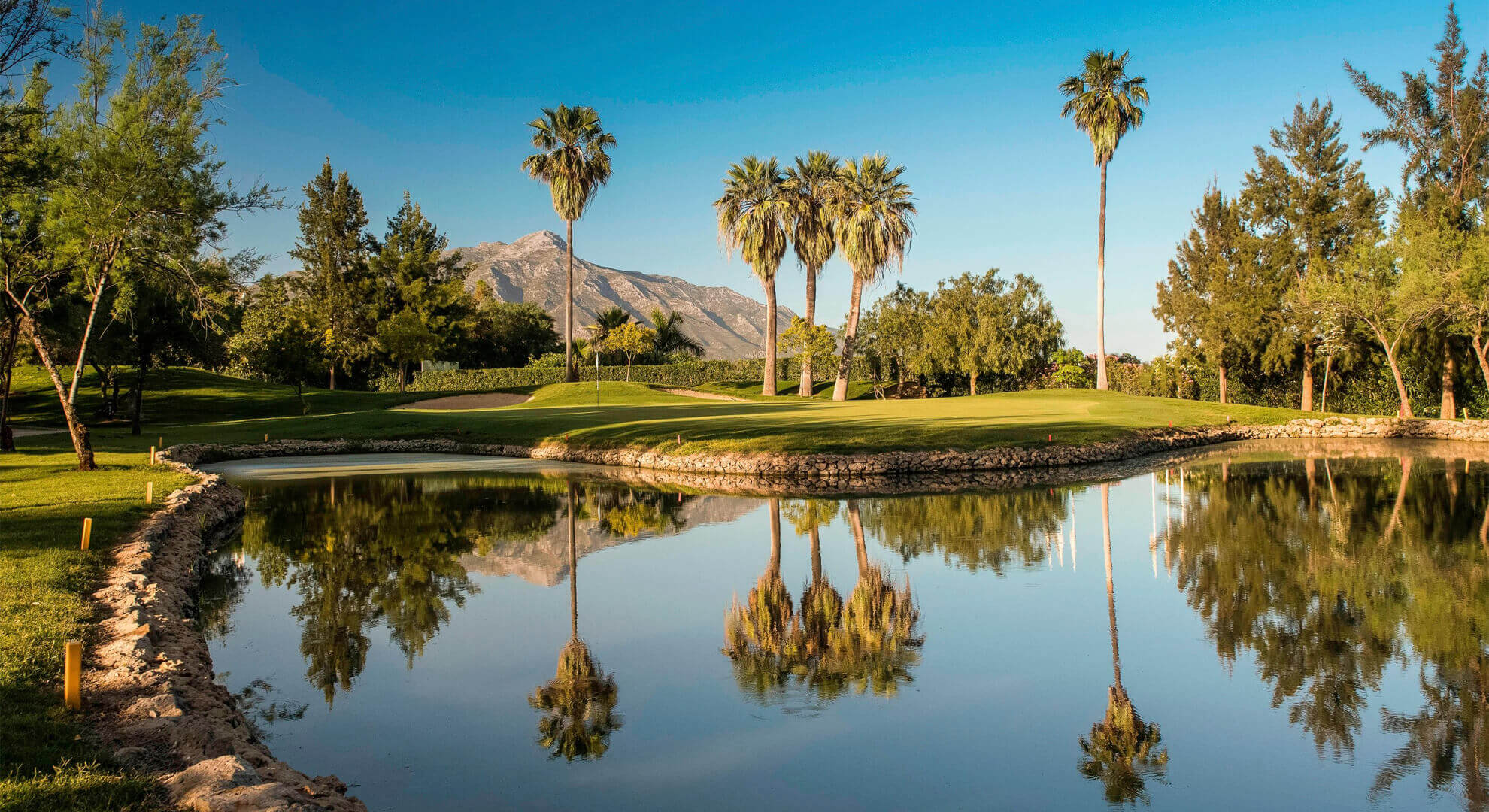 La Quinta Golf & Country Club is located in the Golf Valley of Marbella, in an area of exceptional beauty between the sea and the mountains. It has an exclusive club with 27 excellent holes, designed by the twice winner of the World Cup and twice Ryder Cup player Manuel Piñero. La Quinta Golf is one of the most attractive golf clubs in the area and is suitable for all levels of play. 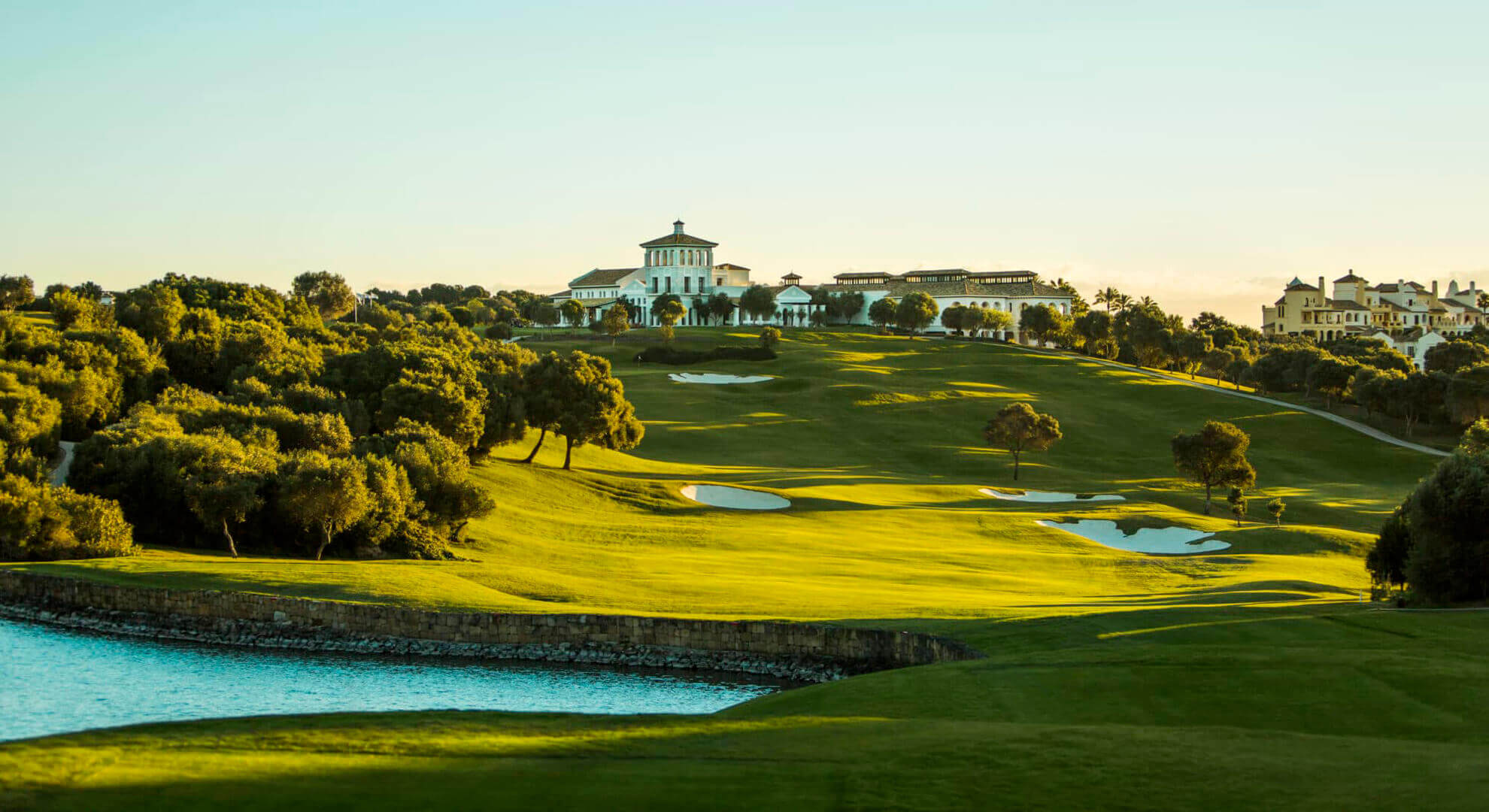 Sotogrande is the home of legendary golf courses and La Reserva Club continues this historic legacy while creating a contemporary experience that defines the area today. Carved into the hillside with natural vistas in every direction, the 18-hole championship course was designed in 2003 by course designer Cabell B. Robinson, so much a part of the great golf experience in Southern Spain. With wide, sweeping fairways that lead on to large greens, gentle but challenging undulations and various water features, La Reserva is a must-play! golfer 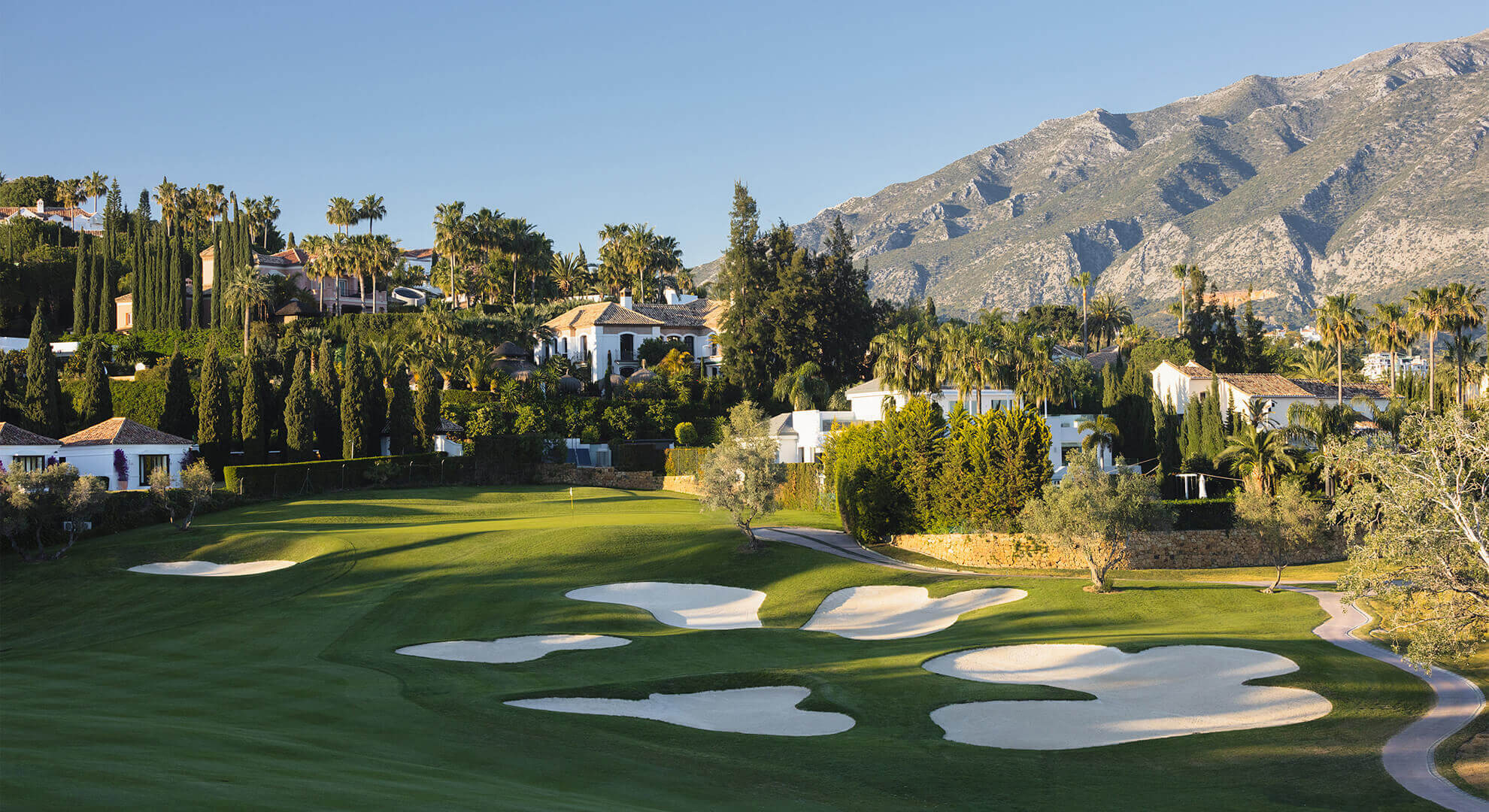 When you enter Los Naranjos Golf Club, you notice that special and welcoming atmosphere the club exudes.The golf course, a master piece designed by Robert Trent Jones Sr. has been crucial in the preparation of many professional golf players and is considered to be one of the best courses in Spain. Los Naranjos Golf Club does not only represent a superior golf course but also a great social welcome. 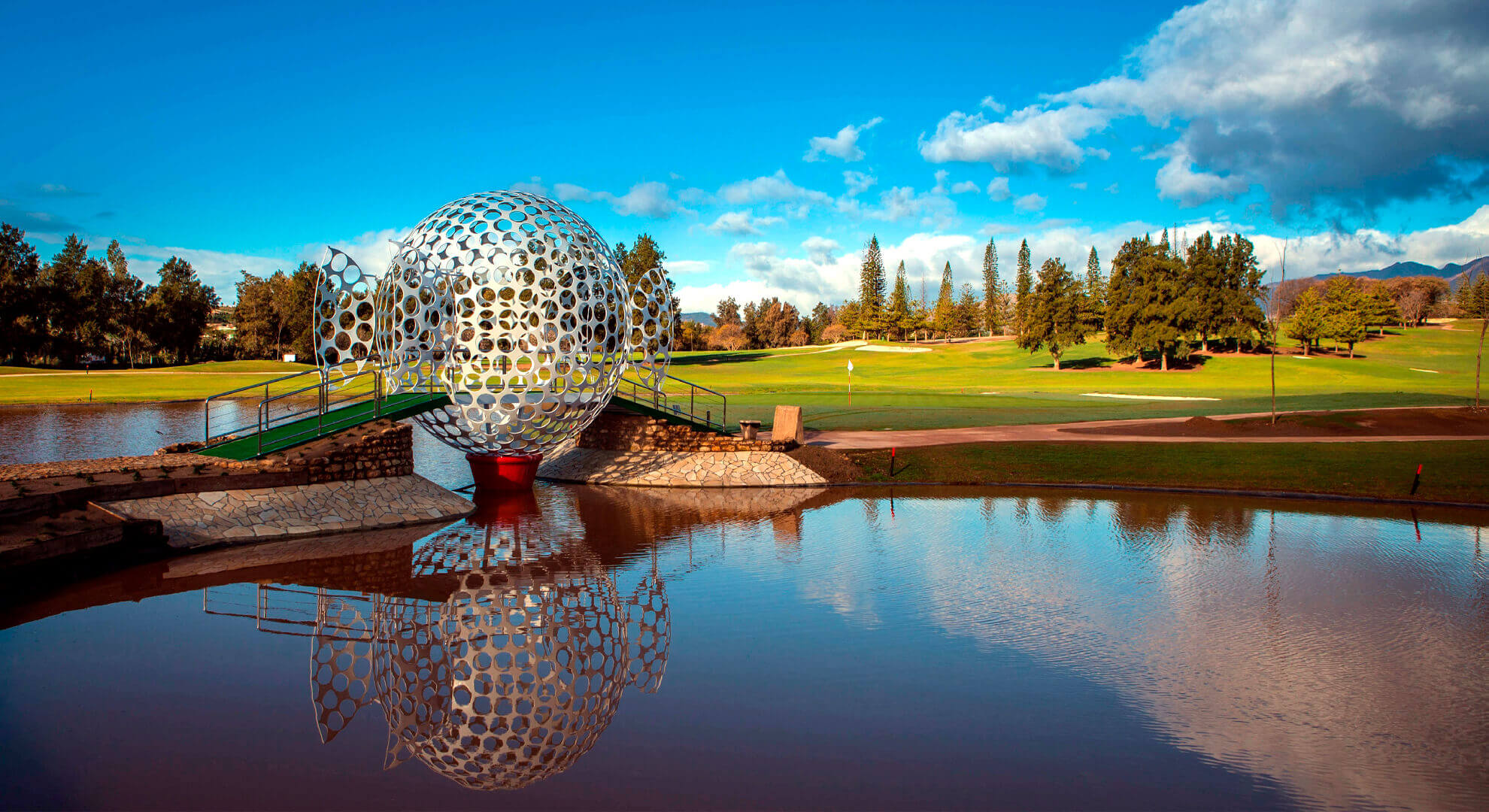 This courses are great examples of the architecture of Robert Trent Jones Senior who created a two very enjoyable course with Lagos` soft slopes, generous landing areas with only a sprinkling of trees but its defence being the bunkering and a number of strategically placed water hazards. Its expansive putting surfaces make this one of the Costa de Sol`s most enjoyable courses and Olivos compliments it beautifully as it meanders through olive trees and has slightly tighter landing areas and smaller putting surfaces with less undulation. 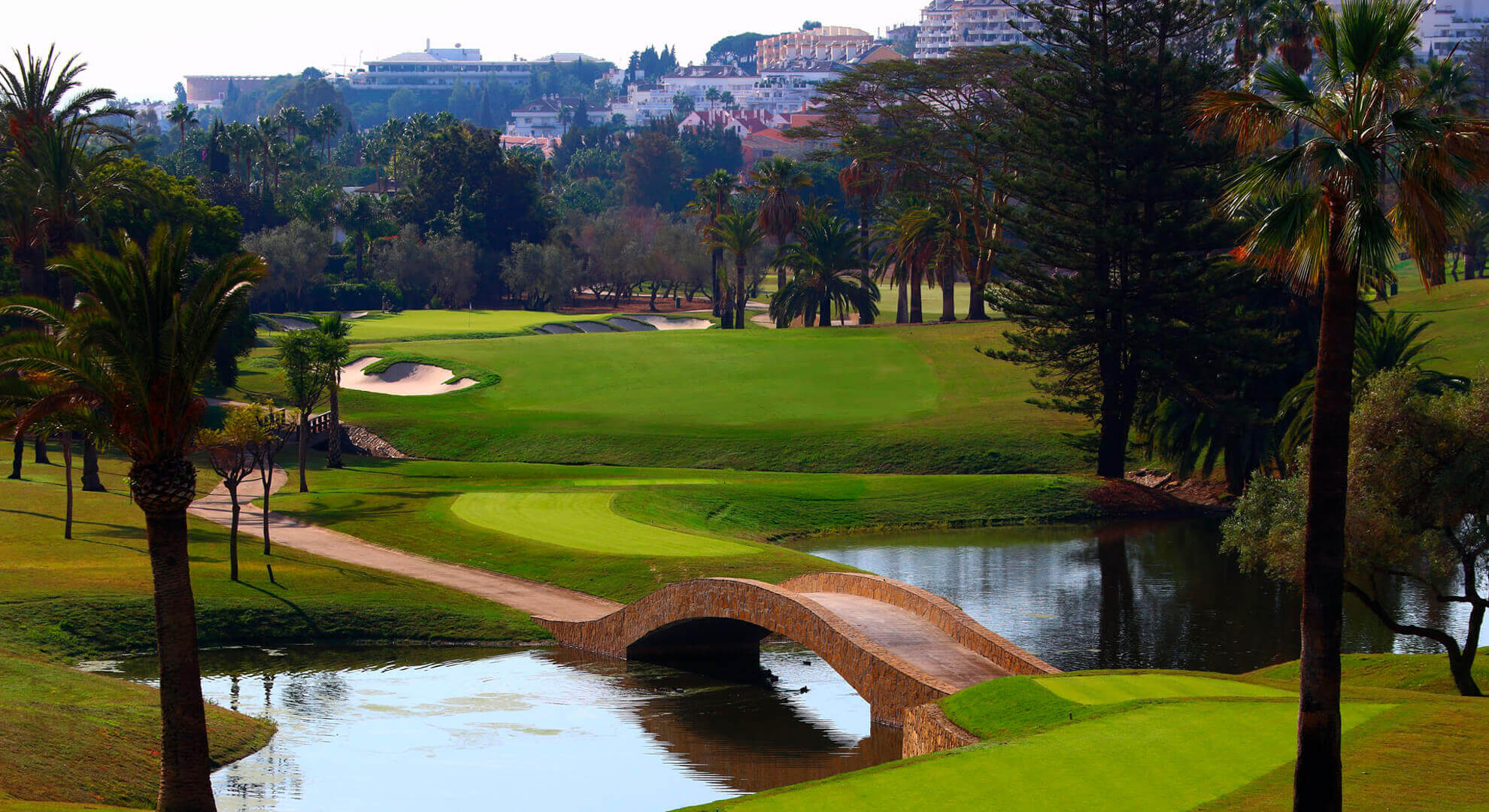 Originally when opened in 1968 by Jose Banus, it was known as “Club de Golf Nueva Andalucia” For its design he chose the great Robert Trent Jones Senior, who was already considered one of the best golf course designers in the world. He had just finished building the golf course at Sotogrande and after Las Brisas, went on to design Los Naranjos and Club de las Aves, afterwards named Valderrama. The course includes numerous water obstacles; there are ten artificial lakes fed by two streams. The greens, the majority of which are raised, are amply protected by bunkers. The results of Robert Trent Jones’s efforts, which we continue to enjoy today, were truly notable and original, creating a difficult and attractive course. 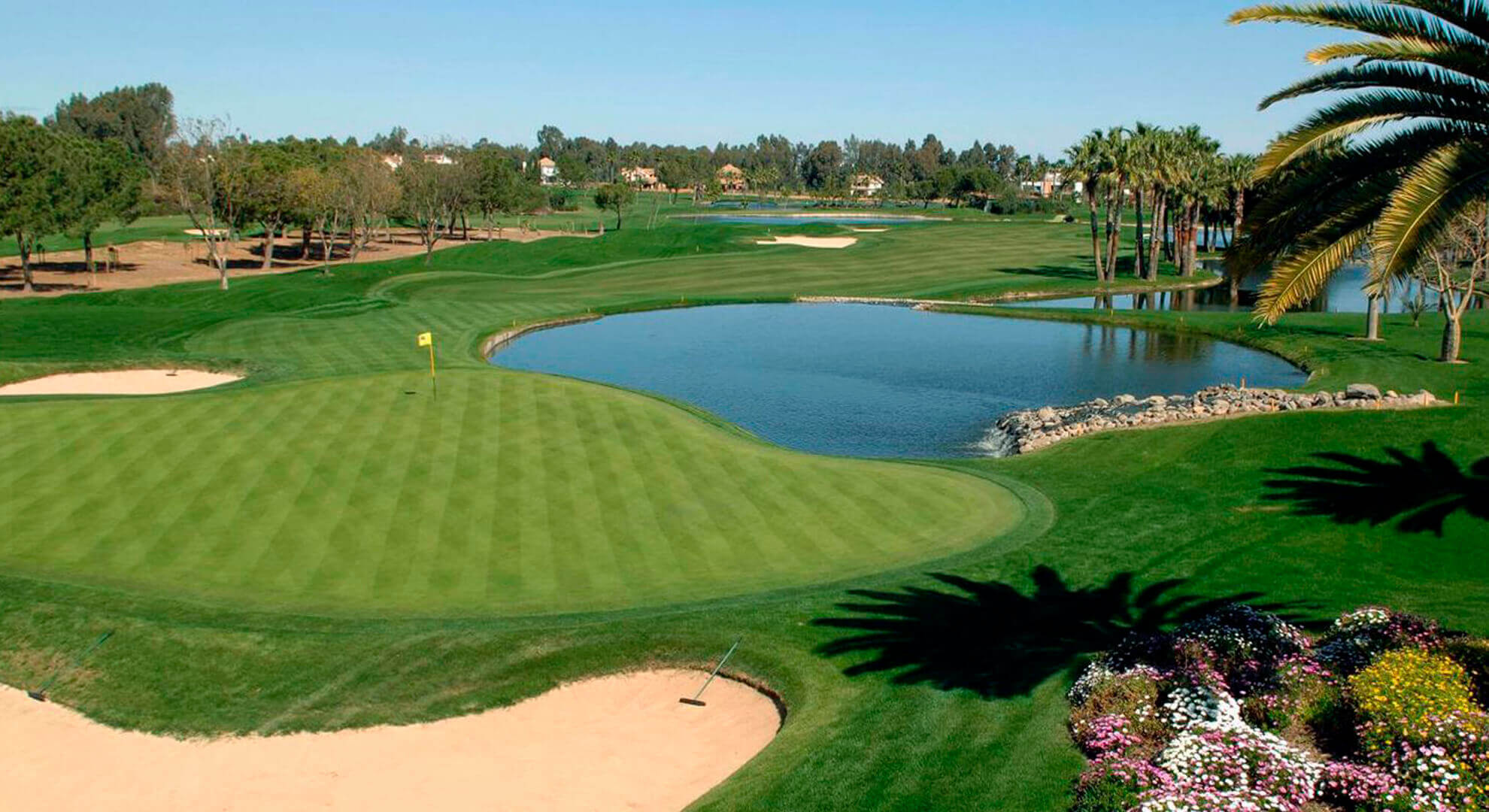 The Course was designed by twice Masters champion, Jose Maria Olazabal . It has a balanced layout able to accommodate any type of competition, both amateur and professional. It is an extensive course featuring wide fairways, planted with Bermuda 419 and undulated greens of Agrostis Stolonifera A1, very well protected by 90 bunkers and 9 lakes over three hectares. It was recently ranked Top 5 in Spain by prestigious magazine ‘Golf Digest’. 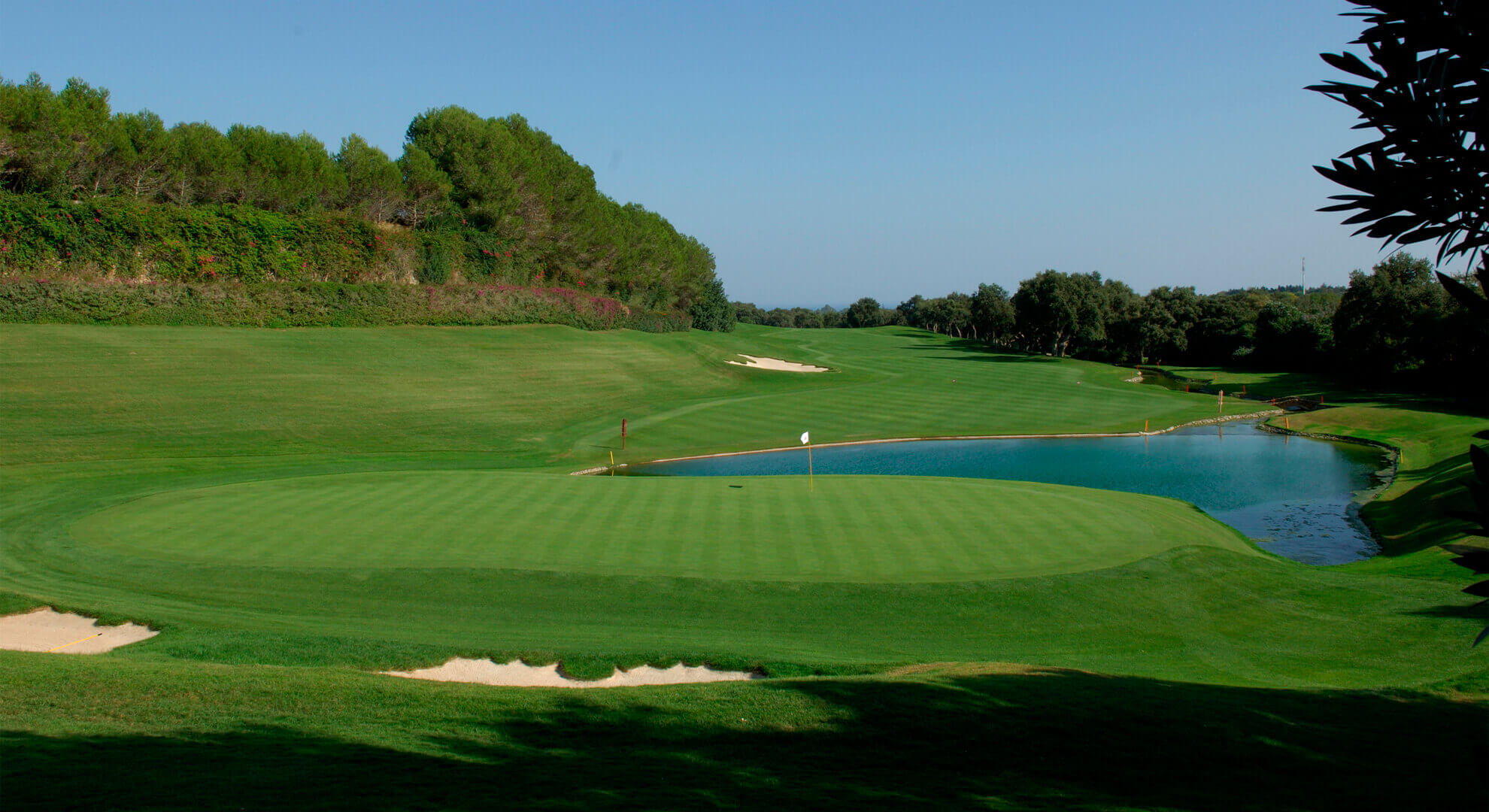 Valderrama was constructed in 1974 as “Sotogrande New,” to the designs of leading American golf course architect Robert Trent Jones. Renamed “Las Aves” in 1981, it was acquired by Jaime Ortiz-Patiño in 1984. The golf course was redesigned and expanded by the original architect and became “Valderrama.” This course is in many publications` the best course in Europe and always in the top 4. 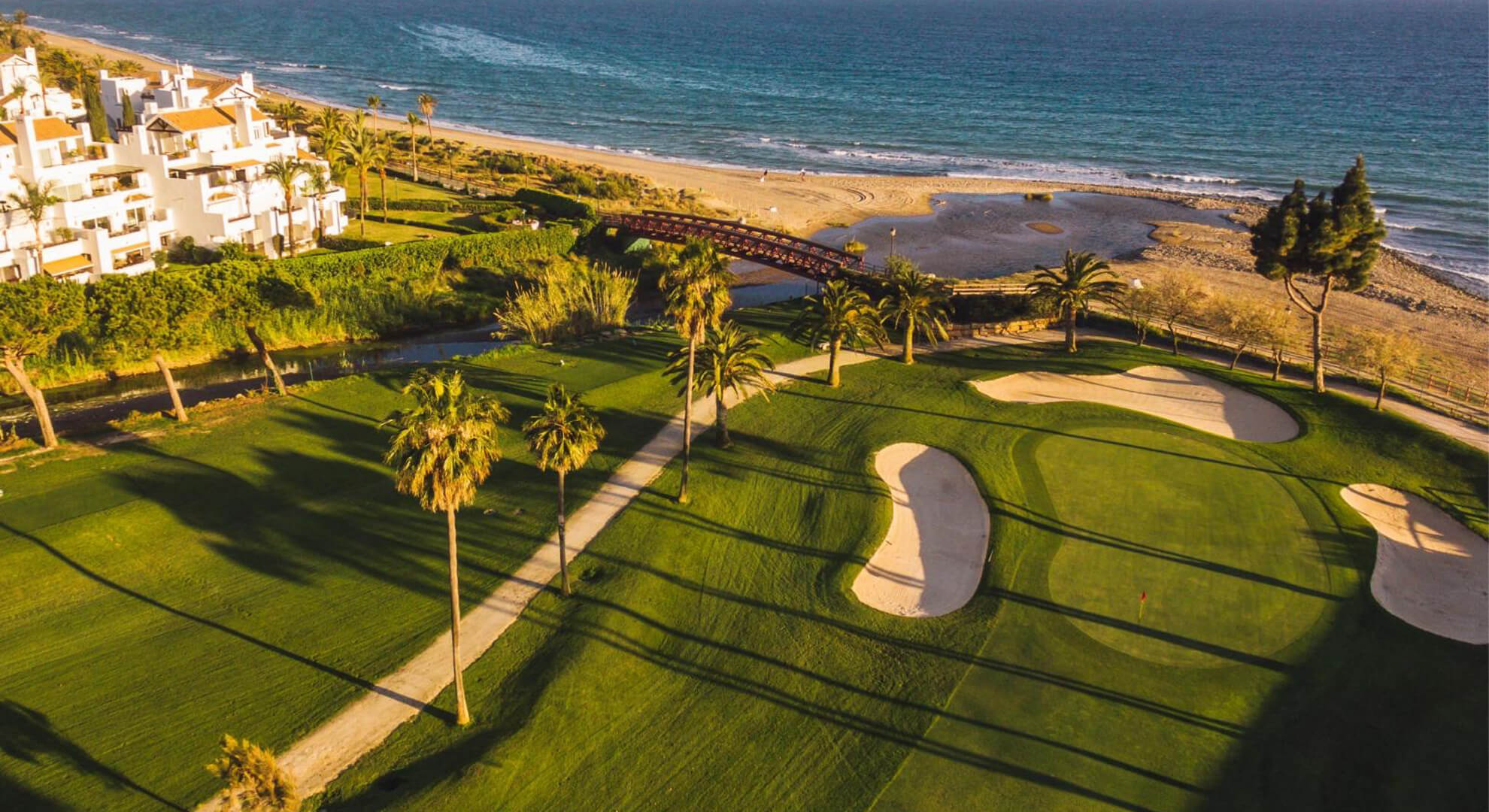 A wonderful course designed by legendary architect Javier Arana who also designed other Spanish classics like El Saler and Club de Campo in Madrid this course opened, during the boom in Spanish golf, in 1965. It is suitable for all levels of player and its beauty and test of golf is a wonderful combination most spectacular amongst its seafront holes. 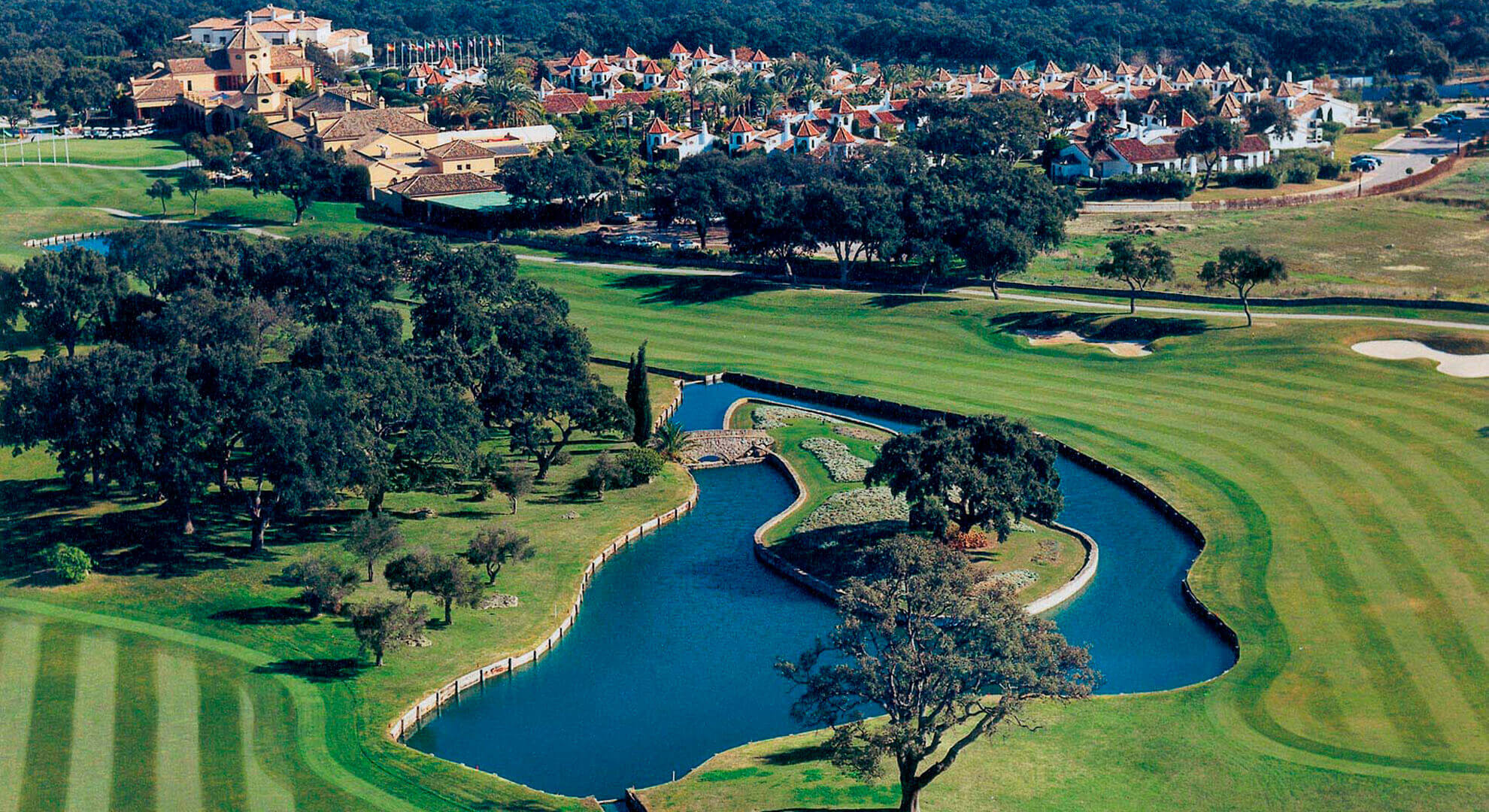 The amazing Old course is reserved for members only except for limited daily public periods when the general public can make use of its amazing fairways set at the foothills of the Sierra Bermeja, where the mountains meet the sea. Designed by Dave Thomas with bunkers redesigned by Seve Ballesteros, The Old Course is rated amongst the finest in Europe. It co exists beautifully with the New course , designed by the legendary Perry Dye with the collaboration of Severiano Ballesteros, it has all the conditions to be part of the elite of European golf due to its high technical quality, its beautiful layout and impeccable finish. It was the scene of the 2006 Spanish Open and has also hosted the final of the qualifying school of the European tour. This luxury hotel in Marbella is named to capture the essence of this private paradise and Amare means love and gives a feel of the sea. This encapsulates the best elements for a perfect stay – an open door to a dreamlike sea experience. Walk the Mediterranean beach or sip a cocktail on the beach, you choose! The Resort is located on the very first line of the Arroyo Vaquero beach, a beach awarded each year with the blue flag by the EU and within a unique enclave with a large extension of gardens with palm trees, flowers and vegetation. Located on the outskirts of the beautiful city of Estepona and its charming port, a few minutes from Soto Grande, Gibraltar, Tarifa, Marbella and the exclusive Puerto Banús. Estepona Hotel & Spa Resort is an ideal place to live a unique and quality experience on the Costa del Sol with a unique climate between the Atlantic Sea and the Mediterranean Sea, protected by the imposing Sierra Bermeja. 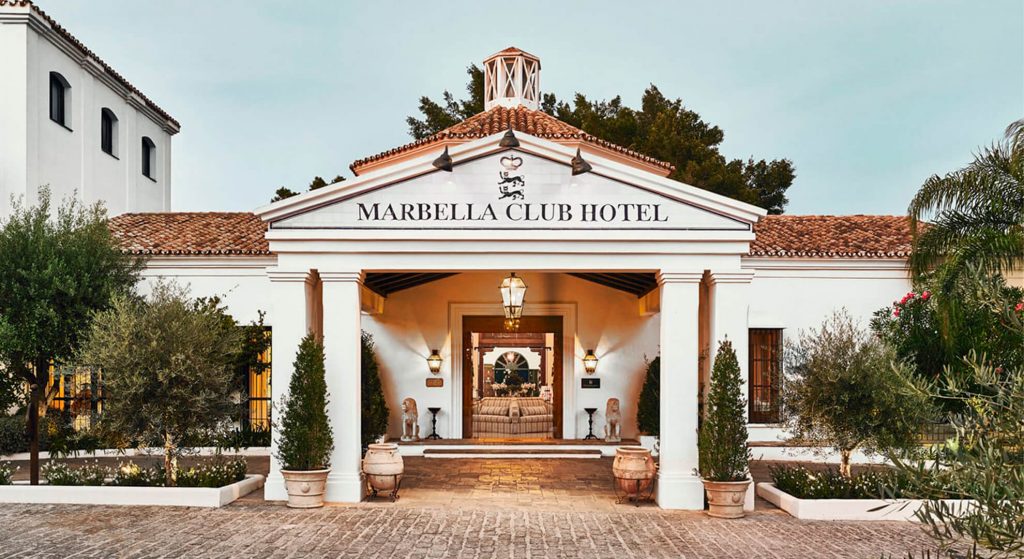 We cannot sum it up better than this quote: Elegant simplicity – it is the Marbella Club philosophy. It is our way of life.’ – Prince Alfonso You could so easily fall in love with this corner of the world, its gentle micro climate, sea air and mountain views and experience a storied finca named Santa Margarita that has endured time by poignantly blending heritage and innovation whilst retaining its original charm.
A place rich in traditions that embraces the Andalusian spirit, you have to move at their pace, one that nurtures the important things in life, family, community, laughter and togetherness! 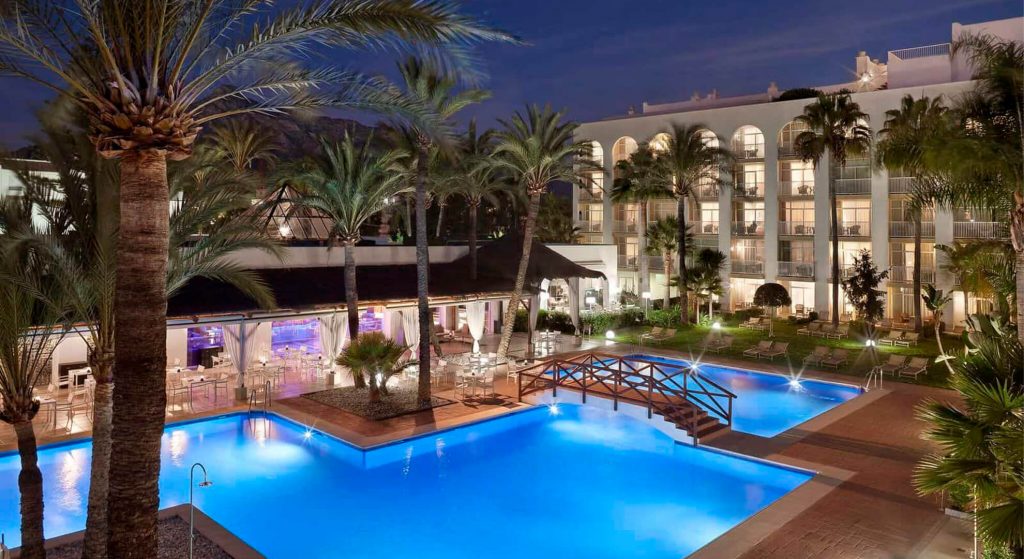 Best described as a ‘vacation on the Golden Mile’ Meliá Marbella Banús has everything one step away: the beach, exclusive boutiques, golf courses and the lively urban center. Relax in your pool and discover its delicious gastronomy.