MTC Golf Director of Tours Stewart Smith has been a PGA member for 38 years, and having worked at top facilities in Scotland, England, Europe and North America, has huge experience of creating the ultimate golf experience. Along with the MTC team of expertly knowledgeable customer care professionals, we are renowned as the provider of bespoke tours which fit the clients criteria every time.

We pride ourselves in the depth of knowledge to deliver all elements of our clients trips, and love to work with you to ensure the key components of the trip are in place. Built around golf courses and lodging, we believe that in order to design the very best bespoke itinerary possible, it’s the little touches and special details that make the trip memorable.

Our expertise in selecting the very finest lodgings, golf courses, restaurants and attractions for your experience, allied to exceptional attention to detail means you could not be in better hands, whether you are an agent looking to create the perfect trip for clients or a golfer similarly looking for the trip of a lifetime.

Stewart currently serves as the Director of Tours for MTC Golf enabling him to indulge his passion for creating great, innovative tours for our clients.

He began playing golf in his native Dundee at age 12, inspired by watching the world`s great players at the 1975 Open championship at near by Carnoustie. His handicap was scratch within four years and he turned Professional three years later playing the tours of Europe, Scotland and in England where he worked for three years.

He then settled into Club Professional roles in Aberdeen and Prestwick before his first Director of Golf role at Dundonald Golf Links before serving as Golf Tourism Manager in Scotland`s South West.

His knowledge of project management and marketing took him onto Director of Golf at 5* Cameron House Hotel on Loch Lomond and then the same role at the exclusive Renaissance Club in East Lothian adjacent to Muirfield.

He consulted for a number of years on projects in the USA, Scotland, England, Cyprus and France and has since happily condensed all his knowledge of golf and customer care into his present role, where the greatest satisfaction is getting feedback that a persons lifetime trip was all or more than they had hoped it would be!

He has lived in Troon for 31 years with his wife Lindsey, now across the road from their daughter Charlotte, grandson Jessie and close to son Lloyd in Glasgow, and beyond golf enjoys tennis, cycling, reading, cooking, football and walking his two dogs Maggie, a cockapoo, and Juno, a cavapoo!

Lindsey  has worked in Administration and Management for nearly forty years, initially at the Marine Hotel in Troon then her father`s manufacturing business also in Troon. After his retiral Lindsey went onto work with the very successful Buzzworks group in payroll covering the staff at their hospitality venues across Scotland.

When she and Stewart took over the travel business she set up the Office Management and Administration systems and has continued to manage this very effectively for the past 7 years.

A keen golfer whose handicap has been as low as 6, she has won Open tournaments across Scotland and represented Turnberry Golf Club where she is a Past Ladies Captain of the Club.

She enjoys walking. tennis, golf and spending time with her family – Charlotte, who works in Glasgow but lives very close by with grandson, Jessie and Lloyd, who lives in Glasgow.

The Murcar Links meets Royal Aberdeen at its ninth green and shares the same spectacular dune land and stunning North Sea views in addition to sharing its neighbour`s ability to challenge a golfer of any standard.

The course was originally designed by Archie Simpson in 1909 it was improved upon by 5 times Open Champion, James Braid in the 1930`s and has hosted, amongst other professional and amateur events, the European Tour`s Paul Lawrie Match Play in 2015 won by Thailand`s Kiradech Aphibarnrat. Being only 5 miles from Trump International Links and bordering Royal Aberdeen it is a must play along with these two and Cruden Bay. 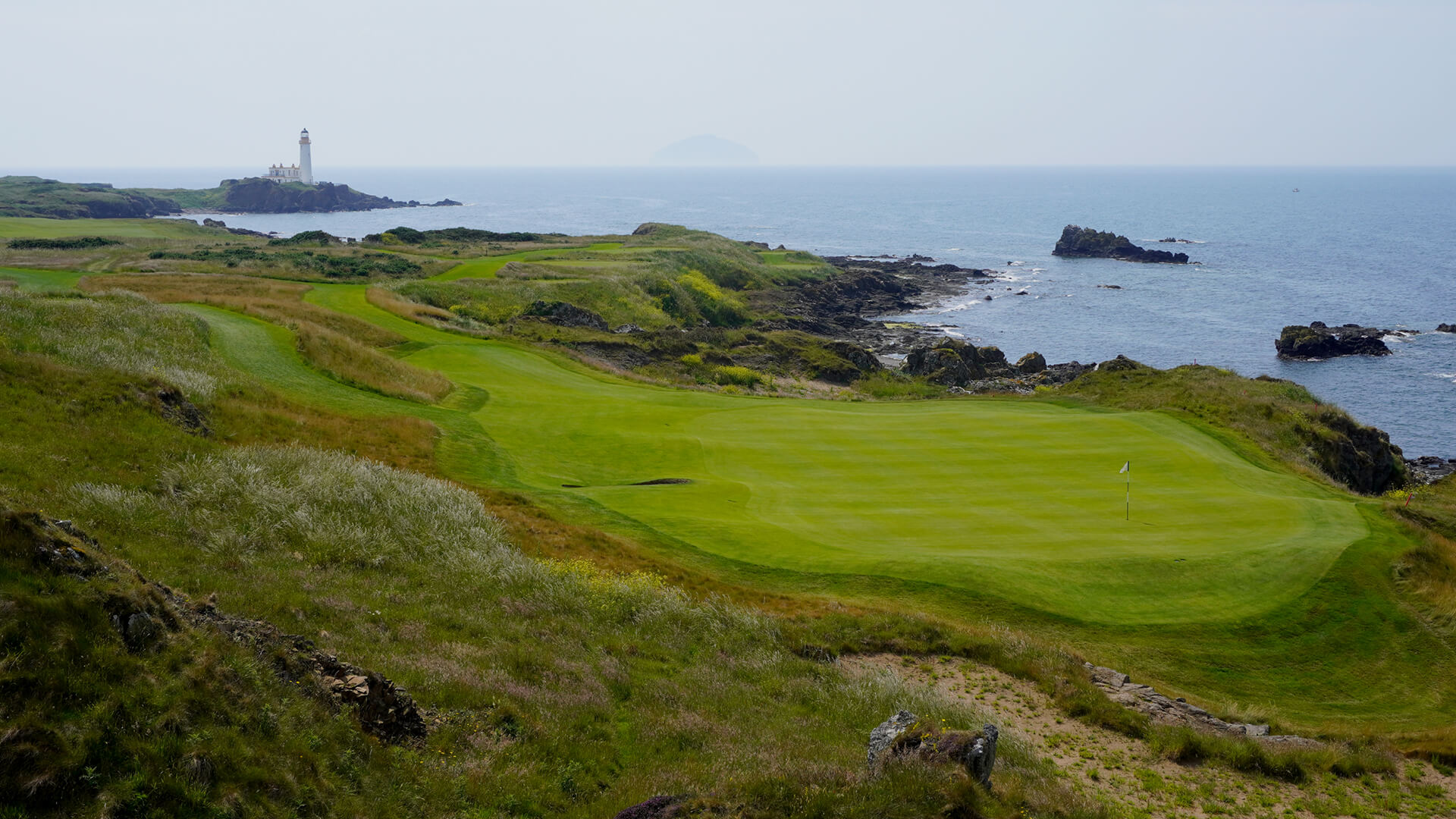 This magnificent site was developed by Donald J Trump, opening in 2012. The in put from the owner along with the experience of the Royal and Ancient Golf club`s architect, who has improved many Open Championship venues, Dr Martin Hawtree created a golf course which has achieved the highest ever top 10 United Kingdom and top 100 World ranking entry positions with various top publications. As Dr Hawtree said  “It will produce simply the most dramatic, stimulating, invigorating stretch of golf anywhere I have seen in my career”

This magnificent links rates at World no 71 per www.top100golfcourses.com and rightly so! It meanders through the same, most dramatic in Scotland, dunes as Royal Aberdeen and Trump International Golf Links. There are records showing golf being played on the site near Slains Castle in 1791 and indeed the Club has in its procession a Medal played for over this original course in 1883. The present course was commissioned by the Great North of Scotland Railway Company in 1894 as a facility to accompany the Cruden Bay Hotel and designed by four times Open champion Old Tom Morris of St Andrews. It fully opened in 1899 with an inaugural professional two day open tournament.

The leader after the first day’s play was 6 times Open Champion Harry Vardon. On the second day the leading four qualifiers went into matchplay and in the final Vardon beat David Kinnel from Prestwick St Nicholas by 3 and 2.

Bram Stoker used to frequently stay in the near by Kilmarnock Arms Hotel and used Slains Castle (very visible from the early holes) as his inspiration for the Dracula novels!

The Cock and Bull is situated vert close to Trump International Golf Links and is a great eatery or watering hole after golf there or on the way back from Cruden Bay. It is cosy inn with great local produce and lovely surroundings. It boasts an AA rosette and is in the Michelin Eating Out guide in addition to being voted Scottish gatropub of the year three times.

Voted by our discerning clients the best restaurant in Aberdeen city center its situation is everything its name suggests: In the heart of Aberdeen`s harbour and beach coastline The Silver Darling promises a great view with a passion for local produce with memorable food and drink.

The Green as it is known locally lay neglected until recently. It is now the attention of foodies through the wonderful efforts of local entrepreurs with the restaurant Café 52 as its featured attraction.

Set in a little quadrangle behind the main thorough fair of Aberdeen, Union Street you are guaranteed a great night and never to be forgotten meal at Café 52.

The Marcliffe has been an Aberdeen institution since it opened under the ownership of legendary hotelier, Stewart Spence, in 1993. The house dates back to the 1850`s and was owned by many.well known, wealthy local families which Stewart built up to be Aberdeen`s best and only 5* hotel.

Whilst a member of “The Finest Small Hotels of the World” it prides itself on being relaxed and homely with a wonderful spa, amongst the best cuisine in Aberdeen and the cities` most comfortable lodgings.

The Marcliffe has been an Aberdeen institution since it opened under the ownership of legendary hotelier, Stewart Spence, in 1993. The house dates back to the 1850`s and was owned by many.well known, wealthy local families which Stewart built up to be Aberdeen`s best and only 5* hotel.
Whilst a member of “The Finest Small Hotels of the World” it prides itself on being relaxed and homely with a wonderful spa, amongst the best cuisine in Aberdeen and the cities` most comfortable lodgings.

This chic, stylish hotel, as is the Malmaison, located in the West End on Queens Road is a sophisticated, elegant choice with a fine dining 1X restaurant and vibrant cocktail bar which also has a great menu.

Relax in the Egyptian cotton sheets and re invigorate under the hotel`s rainfall showers – a great location for your stay in the Granite City.

Set in the heart of beautiful Aberdeenshire the 240 acre Estate with its 13th Century baronial mansion as the center piece Meldrum is a truly luxurious experience.

Awarded a Thistle  in 2019 at the prestigious Scottish Hospitality Awards, this Scotland`s officially “Most Hospitable hotel” is complimented by a great golf course and academy, wonderful dining in the 1236 Cave Bar and Fine dining in the “Pineapple Grill and Seafood restaurant” where the 2 Rosettes are truly merited.

Donald Trump acquired this wonderful site including a hunting lodge which he renovated and re named after his mother`s maiden name, McLoed House. It is a truly 5 star experience on the outskirts of Aberdeen with superior and grand deluxe bedrooms and dining to match in addition to an intimate bar wonderfully stocked with Scotland`s most famous drink!

Located on the entrance road to the world class Trump International Golf Links, this is a great base for the links golf on offer around the Resort.

Cults although only 10 minutes from Aberdeen city center, retains a lovely, village feel and that same warm, friendly experience is on offer at the Hotel. Ideal for golfers and owned by a very keen golfer who knows how best to cater to the golfing guest.

The busy restaurant offers wonderful local produce with a great menu of local and International dishes.

Part of the Mercure group, Mercure Aberdeen Ardoe House Hotel & Spa is a beautiful 19th Century mansion house, originally designed by renowned Castle designer James Matthews and built by Alexander Ogston, with the Queen`s near by residence of Balmoral as the inspiration. Its 30 acres is situated on the leafy South Deeside Road some three miles from the city centre and along with its spa, locally inspired cuisine at Blair`s and Soaphie`s bar it is a great location for visitors to Aberdeen.

This 218 bedroom hotel is in the heart of and very close to the attractions of the Granite City. It is situated in the former Robert Gordon University St Andrews campus and offers corporate, king, kitchenette, and executive suites in addition to a state-of-the-art fitness room.